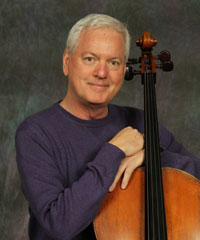 Professor Michael Murray enjoys a varied career as a performer-scholar, dividing his activity between teaching cello and music history at Missouri State University. He regularly appears throughout the United States and Europe as a soloist and participant in chamber and orchestral settings. The Arizona Daily Star praises “the glowing cello of Michael Murray” with music making at once “phenomenal” and “featuring tightly focused passion and confident projection.” The Kansas City Star refers to Murray’s playing as “stylish” with “a veloute sauce richness.” Rome’s Corriere della Sera comments that Murray ‘not only demonstrated mastery or his instrument, but also drew beautiful, limpid sounds and elegant phrasing.” In addition to an active performing schedule, Murray regularly offers upper-level undergraduate and graduate period courses in music of the Baroque, Classical and Romantic eras. He is a National Endowment of the Arts fellowship recipient for post-doctoral research at Harvard University. Murray’s Artist/Scholar Residency in Rome’s American Academy led to research in music for cello by Italian composers of the 1930s. His study in critical thinking in the arts led to a presentation of a paper, The Well-Tempered Ear, at the Center for Critical Thinking and Moral Critique at Sonoma State University.

Michael Murray holds a DMA from the University of Arizona, where he studied cello with Gordon Epperson and music history with James R. Anthony.