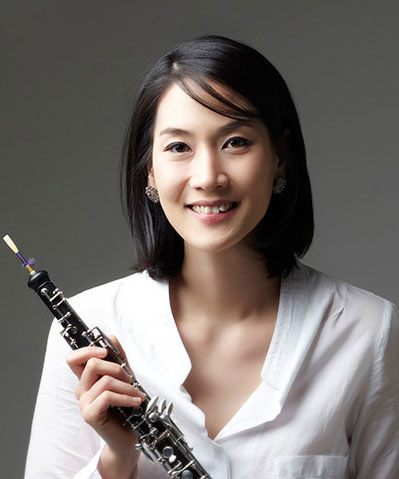 Oboist Jung Choi, a native of South Korea, has quickly established a career of both performing and teaching. She was honorably mentioned twice as the finalist for the Gillet-Fox international oboe competition and started teaching and giving master classes at a collegiate level.

While she was working on her Master’s degree at the Eastman School of Music, Choi was appointed as the oboe/English horn player at the Binghamton Philharmonic. She taught at the Nazareth College and Roberts Wesleyen College in Rochester, NY as well. Upon graduation from Eastman she was appointed as the assistant principal for the Korean Symphony Orchestra and gave up to 90 concerts annually. Choi also taught oboe at the prestigious Seoul National University, her alma mater. As a devoted teacher her students won major music competitions in Korea, were invited to compete in the most prestigious international oboe competitions such as Muri competition and Prague Spring competition, and were invited to numerous music festivals including Pacific Music Festival, American Institute of Musical Studies, Norfolk Chamber Music Festival and Interlochen Summer Art Camp.

Choi is an avid chamber musician and a member of the wind ensemble Winds, an oboe ensemble the Piri, and a woodwind quintet Sunyul. She was invited as principal oboist to Daegwanryoung Music festival, Incheon and Arts festival and Malaysia Festival Orchestra. Apart from classical music, Choi’s interest lies on other genres of music as well. She has recorded music for movies, musicals, and K-pop songs. She also performed the oboe on a Korean national television show collaborating with a poet.