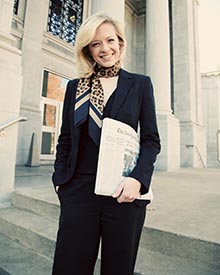 Journalist has worked in the Middle East

Speaker at the 2015 summer commencement ceremony

Jennifer Moore is a journalist and writer based in West Plains. She grew up on a farm and attended West Plains High School.

She graduated with honors from the University of Missouri School of Journalism before spending five years in the Persian Gulf region, where she worked as a freelance journalist for CNN-International, NPR, and the largest English daily newspaper in the region, The Gulf News.

During her time in the Middle East, Moore reported on human rights abuses of domestic workers and the humanitarian toll of the second Iraq War. For CNN-International’s program, “Inside the Middle East,” she reported exclusively in the Arabic language to track down members of former Iraqi President Sadaam Hussein’s cabinet who had fled Iraq.

After returning to the U.S. in 2007, she worked as a reporter, anchor and assignment editor for the NPR station in Springfield, Missouri, KSMU Radio, where she filed local and national stories on the rural Ozarks.

Her interviews ranged from methamphetamine addicts to CEOs, and she reported on the democratic process, the Joplin tornado aftermath, the criminal justice system and health care.

She recently left the field of daily journalism to pursue a career writing books, a graduate program at Missouri State University, and working as the Coordinator of Theatre and Events for MSU-West Plains.

Moore will give a commencement address titled “The New Civil Service: Blending Your Dreams With Giving Back.”  She’ll address the importance of community involvement and giving, especially in areas like the Ozarks.