Military training made its first official appearance on campus with the initiation of the Student Army Training Corps during the latter stages of World War I.

During World War II, Springfield State Teachers’ College (as MSU was called then) participated in the Air Corps Cadet Training Program from February 1944 to June 1945.

The third and present phase of military training at Missouri State University started with the activation of the ROTC Detachment in July 1952. The contract for the ROTC Program provided for annual production of not less than twenty-five officers.

The first regularly scheduled Annual Federal Inspection was conducted on 1 May 1953. Soon after, the ROTC band was organized under the direction of the Music Department.

Company “L” of the Pershing Rifles was organized as a Drill Team in 1952 and was chartered into the National Society in 1963. The Rifle and Pistol Club was organized during the Fall Semester of 1955. The University Rifle Team also was established in 1955 and was sanctioned by the NCAA in 1986. In 1985, the MSU Military Science Department assumed sponsorship of the University’s Trap and Skeet Club. 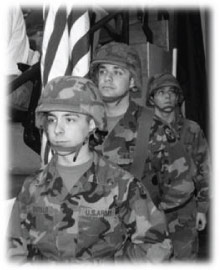 Army ROTC at Missouri State University became a strictly voluntary program in the spring of 1970. Prior to that time, all physically fit male students entering MSU were required to enroll in the first two years of the ROTC Program. With a switch to an all-voluntary program, enrollments dropped significantly. As a result, the ROTC Program was offered at nearby Evangel University, Drury University, Baptist Bible College, and Southwest Baptist University. Evangel College commissioned its first ROTC graduate in December 1974.

Beginning with school year 1974-75, female students enrolled at MSU and at the affiliate colleges and universities. In May 1976, MSU commissioned its first female Army Officer.

With a program over 200 cadets strong, MSU ROTC continues to grow. Its impact is felt on campus and in the community from the traditional Color Guard duties and the cannon crew at Bear’s games, numerous community events such as Veteran's Day activities, and major national events such as the annual Bataan Memorial Death March in White Sands. The Bear Battalion is consistently among the top finishers each year at the Ranger Challenge Competition, with their first ever all-female team taking top honors at the Task Force level competition in 2011 and Brigade level in 2012; in 2015 the male and female teams both placed first at Task Force competition.  As we move forward  after more than sixty years at MSU, we look ahead to the future as funds are raised and designs drafted for extensive remodeling of the Military Science Department and for continued improvements in equipment to better train and develop tomorrow's leaders.