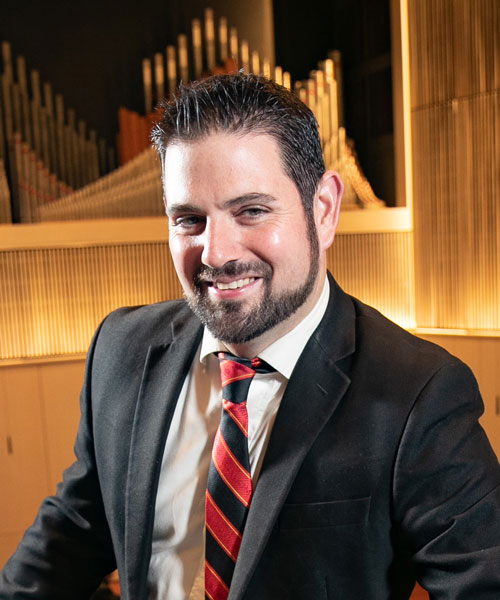 Equally at home as a performer and a teacher, Dr. Jason Hausback has been active in many musical spheres. Prior to his arrival at Missouri State University, Jason was the Adjunct Professor of Low Brass at Eastfield College (Mesquite, TX), and Brookhaven College (Farmer’s Branch, TX). He was also a teaching fellow in both the trombone studio and the jazz studies department at the University of North Texas. Under his direction, the U-Tubes won the 2010 Eastern Trombone Workshop National Jazz Trombone Ensemble Competition, and issued their first CD entitled “The U-Tubes” in the spring of 2011. While a student at UNT, Jason was also a member of the internationally-acclaimed One O’Clock Lab Band and was on the recording “Lab 2009,” which was subsequently nominated for two Grammy Awards.

Jason is active as a freelancer throughout the mid-south region of the US and performs regularly with The Lone Star Wind Orchestra (TX), Symphony of Northwest Arkansas (AR), The Springfield Regional Opera (MO), Ionic Brass (OK), and Fountain City Brass Band (KS).  He has performed solo and quartet recitals at universities and conferences throughout the US as well as in Colombia and Spain.  He has also performed in the Southeast Trombone Symposium Professors Choir and in featured ensembles at several different International Trombone Festivals.

Jason has served on the staff of many prominent high school marching bands in Texas, including Marcus HS (2007-2015), Texas 5A/6A State champions five consecutive times.  He has worked with several drum and bugle corps, including Capital Sound, the Madison Scouts, Spirit of Atlanta, the Boston Crusaders, and Phantom Regiment.  Jason has also been active as an adjudicator for marching band, solo/ensemble and jazz competitions.  Most notably, he had the honor of judging the 2015 ITA Carl Fontana Jazz Trombone Competition (Valencia, Spain) as well as the 2019 ITA Kai Winding Jazz Trombone Ensemble and Gilberto Gagliardi Tenor Trombone competitions (Muncie, IN).

Traveling to and performing at locations around the world: