Dr. Arthur L. Mallory assumed the responsibility of president of Southwest Missouri State College on November 7, 1964. He was the fifth and, at 31, the youngest president to serve the institution. Like two of his predecessors, Presidents Clyde Hill and Roy Ellis, Arthur Mallory was both a native of the Ozarks and a graduate of the institution he was chosen to lead.

President Mallory inherited a restless campus in 1964. Across the country college campuses were riled over civil rights issues, the war in Vietnam, free speech and the counter-culture movement. SMS was not exempt. Campus convocations reflected those issues through the appearance of black comedian Dick Gregory, pioneering journalist John Howard Griffin, the Rev. Jesse Jackson and humorist presidential candidate Pat Paulson.

He proved an effective reconciler as he opened Board meetings to the public and provided students and faculty opportunity to voice their concerns about institutional policies. He spoke throughout the district extolling the virtues of the institution, its growth and its promise. Under the leadership of President Mallory, volatile racial issues and dissent over the war did not boil over into campus disruption.

Academic progress was made with the authorization of an independent graduate program in 1966, offering master's degrees in history, English, education, mathematics and theater. An innovative religious studies program was opened in 1969.

The Mallory years were characterized by burgeoning growth. Between 1964 and 1971, enrollment grew 130 percent, from 4,317 to 9,930, including students from more than 14 countries abroad. New facilities constructed during the period included Greenwood Laboratory School, Craig Hall, Temple Hall, Taylor Health Center, Baker Bookstore, Woods House and Blair-Shannon House as well as additions to the Memorial Library, the Student Union, Wells House and Freudenberger House.

By 1967, the campus had grown to approximately 60 acres as it moved north and west from its original 38-acre site. 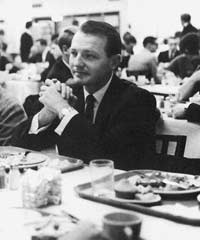