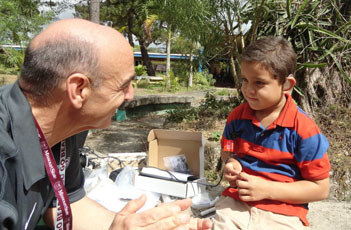 In fall 2012, Dr. Michael Steer, then a doctoral student in Audiology, approached Dr. Neil DiSarno with a proposal to develop a service-oriented education abroad opportunity that would provide hearing aids to individuals living in Nicaragua. Dr. DiSarno and Dr. Letitia White were co-directors of the first Nicaragua Education Abroad trip in March of 2012. That initial and all subsequent trips were facilitated by Chris and Barry Lydon, Dr. Steer’s in-laws, who are missionaries living in Nicaragua. So far, there have been five follow-up trips co-directed by Dr. White and Dr. Lisa Proctor: January 2013, January 2014, May 2014, October 2014 and May 2015. As the structure of this program continues to evolve, many of the same clients have returned to receive follow-up services. This has provided the unique opportunity for speech and language consultation, especially for the young children who were fit with hearing aids during initial visits. It also opened the door for partnerships to be formed with schools in the cities visited during these trips. While this Education Abroad opportunity provides humanitarian service on a global level, university students involved with the trip also benefit from gaining cultural competence through interactive learning experiences.

The initial trips to Nicaragua in March 2012 and January 2013 laid the groundwork for the Education Abroad Nicaragua Program. Objectives of these trips included learning more about the culture in rural Nicaragua, establishing relationships with local people, identifying and fitting hearing aid candidates and planning for future trips.

A total of 16 students from Missouri State University traveled to Nicaragua in January of 2014. The goal was to follow up with patients that had been treated on initial trips and to identify and fit new candidates with hearing aids. Information was gathered about the speech and language skills of young patients with hearing loss to identify specific areas of need. This information helped guide consults with the children's teachers and parents. Observations of and interactions with patients and their families inspired first year graduate students to return to Nicaragua in October of 2014 to complete master's level research projects. In addition, a relationship was established between members of the research team and a director from one of the Nicaraguan special schools in the area. The January 2014 trip facilitated a high degree of interdisciplinary collaboration. Students from the Department of Communication Sciences & Disorders were able to collaborate and learn from each other to better their understanding of the department's three areas of study: Audiology, Speech-Language Pathology and Education of the Deaf and Hard of Hearing.

Nine Missouri State students traveled to Nicaragua in May of 2014. In addition to providing follow-up services to patients seen on previous trips, a main objective of this trip was to further establish relationships with three of the special schools in the area. Visits to all three special schools allowed for classroom observations and conversations with teachers and staff. Relationships formed on this trip were crucial to planning for the research-based trip that took place later that year.

In October 2014, four speech-language pathology graduate students in their second year of study traveled back to Nicaragua with Dr. White and Dr. Proctor. Follow-up services were again distributed to past patients, but the main goal of this trip was to facilitate research in the areas of cross-cultural perspectives on disabilities, literacy development and instruction for the deaf and hard of hearing and communication strategies for children with multiple disabilities. Five days were spent interacting with educators of special schools, working with children and families, observing and assessing children. In addition, three workshops were presented for parents and teachers over the topics of: Understanding Hearing Loss, Augmentative and Alternative Communication and Treatment for Children with Autism Spectrum Disorders (ASD). Check out our first trip newsletter!

Will be updated soon!

Want to get involved?

Have questions about Education Abroad Nicaragua? Would you like to get involved as a volunteer or donor? Contact the Department of Communication Sciences & Disorders at CSD@MissouriState.edu.