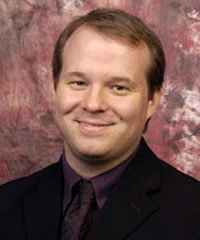 Jeremy Chesman, AAGO, ChM, University Carillonist and Professor of Music, is a graduate of the University of Michigan, where he was the first person to earn a Master of Music degree in Carillon Performance. His performances have been broadcast in the United States, the Netherlands, and Japan, and he has performed live throughout the United States, as well as in the Netherlands, France, Belgium, and Portugal, where he played a recital of American music at the National Palace in Mafra on the European Union's day of mourning for the events of September 11.

His primary research is in pedagogy. He is a registered Suzuki teacher of Organ, Harp, Voice, and Piano. His book, Making Music on the Carillon, was published by American Carillon Music Editions.